In his book on Charles Dickens, G.K. Chesterton says that the figure of the cockney Sam Weller in ‘The Pickwick Papers’ introduces the great subject of all Dickens’ novels, the English people: 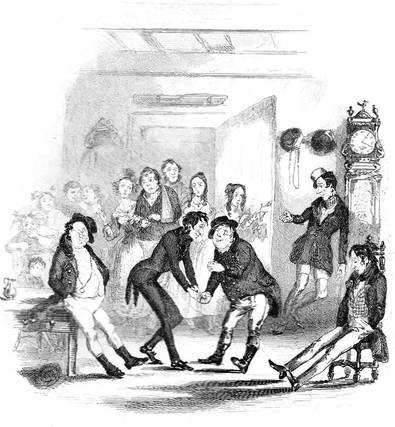 "Sam Weller is the great symbol in English literature of the populace peculiar to England. His incessant stream of sane nonsense is a wonderful achievement of Dickens: but it is no great falsification of the incessant stream of sane nonsense as it really exists among the English poor. The English poor live in an atmosphere of humour; they think in humour. Irony is the very air that they breathe. … The phrase that leaps to their lips is the ironical phrase. I remember once being driven in a hansom cab down a street that turned out to be a cul de sac, and brought us bang up against a wall. The driver and I simultaneously said something. But I said: “This’ll never do!” and he said: “This is all right!” Even in the act of pulling back his horse’s nose from a brick wall, that confirmed satirist thought in terms of his highly-trained and traditional satire; while I, belonging to a duller and simpler class, expressed my feelings in words as innocent and literal as those of a rustic or a child."

G.K. Chesterton, (1911). Appreciations and Criticisms of the Works of Charles Dickens.  J.M. Dent and Sons.

Here, from Chapter 2 of ‘The Pickwick Papers’, is an exchange between Mr. Pickwick, who is keen to note down scientific observations on the world around him, and the driver of a horse-drawn cab:

'How old is that horse, my friend?' inquired Mr. Pickwick, rubbing his nose with the shilling he had reserved for the fare.

'What!' ejaculated Mr. Pickwick, laying his hand upon his note-book. The driver reiterated his former statement. Mr. Pickwick looked very hard at the man's face, but his features were immovable, so he noted down the fact forthwith. 'And how long do you keep him out at a time?' inquired Mr. Pickwick, searching for further information.

'Weeks!' said Mr. Pickwick in astonishment, and out came the note-book again.

'He lives at Pentonwil when he's at home,' observed the driver coolly, 'but we seldom takes him home, on account of his weakness.'

'On account of his weakness!' reiterated the perplexed Mr. Pickwick.

'He always falls down when he's took out o' the cab,' continued the driver, 'but when he's in it, we bears him up werry tight, and takes him in werry short, so as he can't werry well fall down; and we've got a pair o' precious large wheels on, so ven he does move, they run after him, and he must go on—he can't help it.'

Mr. Pickwick entered every word of this statement in his note-book, with the view of communicating it to the club, as a singular instance of the tenacity of life in horses under trying circumstances.